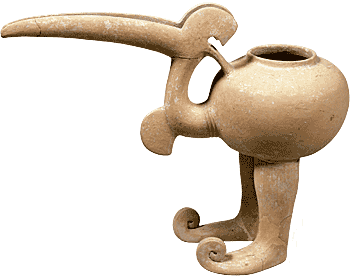 The Ancient Orient department contains primarily small artefacts from ancient Iran, as well as a small selection of finds from Anatolia and Syria, and is one of the most extensive of its kind in Germany.

Ceramics take a special place among the legacies of the early Iranian peoples; and are also the main connecting theme in the Museum's collection, through three millennia of cultural development, from the late Neolithic to the time of the achaemenidic Great Kings in the 5th and 4th centuries B.C. The vessels from the Iranian mountains are worth a special mention, but above all those from the settlements on the south coast of the Caspian Sea: bizarrely formed Amlash beaked jugs and elegant stylised animal vessels.

The bronzes from Luristan in western Iran form an additional central point to the collection: statuettes of gods, jewellery, weapons and vessels from the Bronze and early Iron Ages; these belong to the finest works produced in cast bronze in this era of early history.